Fifty imposing peaks have always lovingly connected the Villgratental valley in a heart-shaped way. But you can only really see it from a bird’s eye view. To ensure that no one gets lost, the legendary 5-day route, which was previously considered an insider tip by the locals, is now signposted throughout and called the Herz-Ass.

The special attraction of the route lies in its guidance, right through the middle of an alpine high mountain range in the border area between East Tyrol and South Tyrol. Seen from a bird’s eye view, the 50 or so mighty peaks of the Villgrater mountains paint a heart into the landscape, in the middle of which lie the two mountaineering villages of Außervillgraten and Innervillgraten, a heart that beats to the rhythm of the Eastern Alps. A gigantic mountain backdrop with the highest and mightiest mountain peaks in Austria and South Tyrol such as the Grossglockner, with 3798m the highest mountain of Austria, the mighty massif of the Großvenediger, the mystical spikes of the grey mountains, the South Tyrolean Dolomites with the legendary Three Peaks as well as the peaks of the Zillertal Alps covered by the eternal ice and the peaks of the Goldberg group in the west and east form the legendary backdrop for a great hiking adventure in the Villgratental valley.

Along the entire Herz-Ass trail, the hiker is able to circle the Villgratental valley in five day stages in a unique natural and cultural landscape. The routes of the Herz-Ass trail are chosen in such a way that each one always represents a daily stage, which means a hike of 6 to 10 hours and thus a full day. Due to the length of the routes, a good physical condition is a prerequisite for a successful hiking day. On the Herz-Ass route you can also climb the striking mountain peaks of our valley. However, additional summit victories extend the route times by up to 3 hours.

In 5 days around the Villgrater mountains

Stage 1: Alpine path to the Herrgottslärche 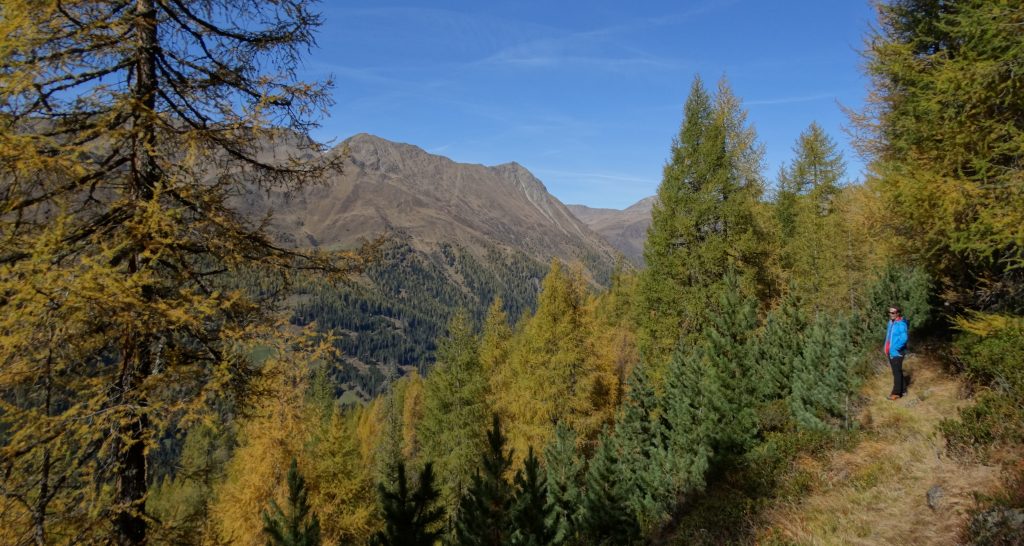 Across 9 alpine pastures up to airy heights

You follow the great role models of the first ascent and inventors of the Herz Ass and climb from the village of Außervillgraten up the mountain to the ridge of the Tessenberger Alm. The path leads through the combat zone of high alpine vegetation, past dark spruce and light larch forests, alpine rose meadows across nine alpine pastures into the Winkeltal valley.

The route connects four mountain peaks with a boundless view over the Garden of the Giants of East Tyrol, far into Carinthia to Lake Weissensee and into Styria. Below you, the scarcely populated Winkeltal valley spirals up to the Volkzein, our hiking destination on the second stage.

At the end you have the possibility to climb the peak of the Sommerwand Köpfl (2.500m) 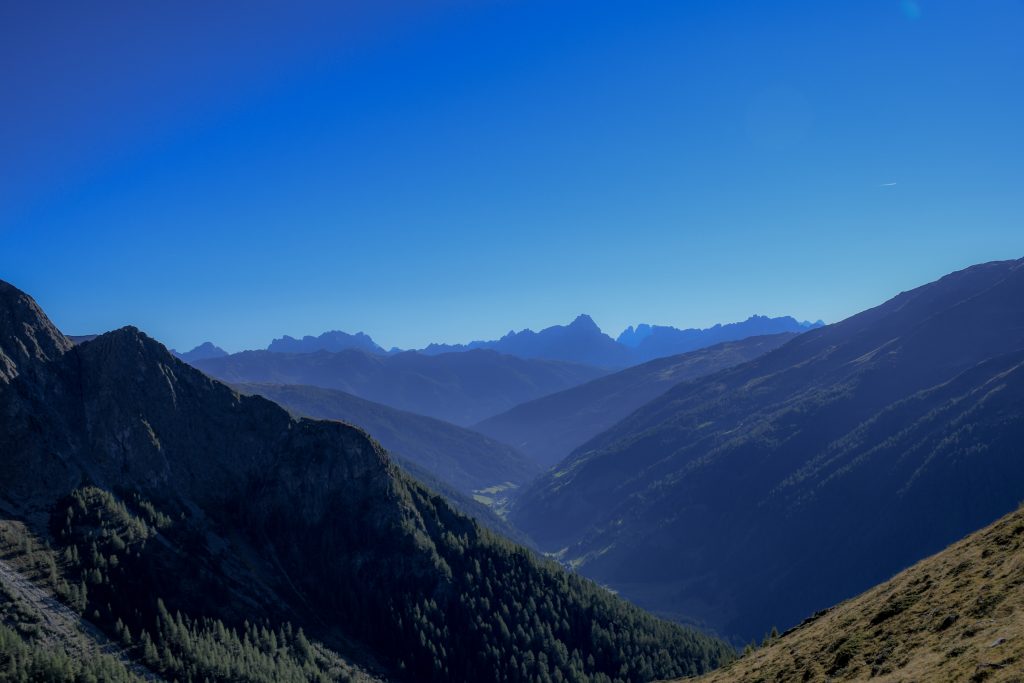 It hasn’t always been this lonely. We follow the Salzsteig in the Winkeltal valley, which leads to 2.583m over the Villgrater Joch to community of Hopfgarten. We leave the high valley and climb via the Brunn Alm back up to the Hofer Kreuz.

In between, spectacular views of Poseidon’s spear, the Sichelspitze, the Defereggental valley, the Kristeinertal valley can be seen. At some point the summit cross of the Gölbner appears. Ancient cattle pens made of stone walls tell of wild animals, of shepherds and their herds, who spent the summer here long ago. At the very top, the view to the south and to the north opens up and the great mountain personalities of the Eastern Alps, the Großvenediger, the Großglockner and many others show themselves in all their glory.

At the end you have the possibility to climb the peak of the Regenstein (2.891m).

Stage 3: Path of springs and water 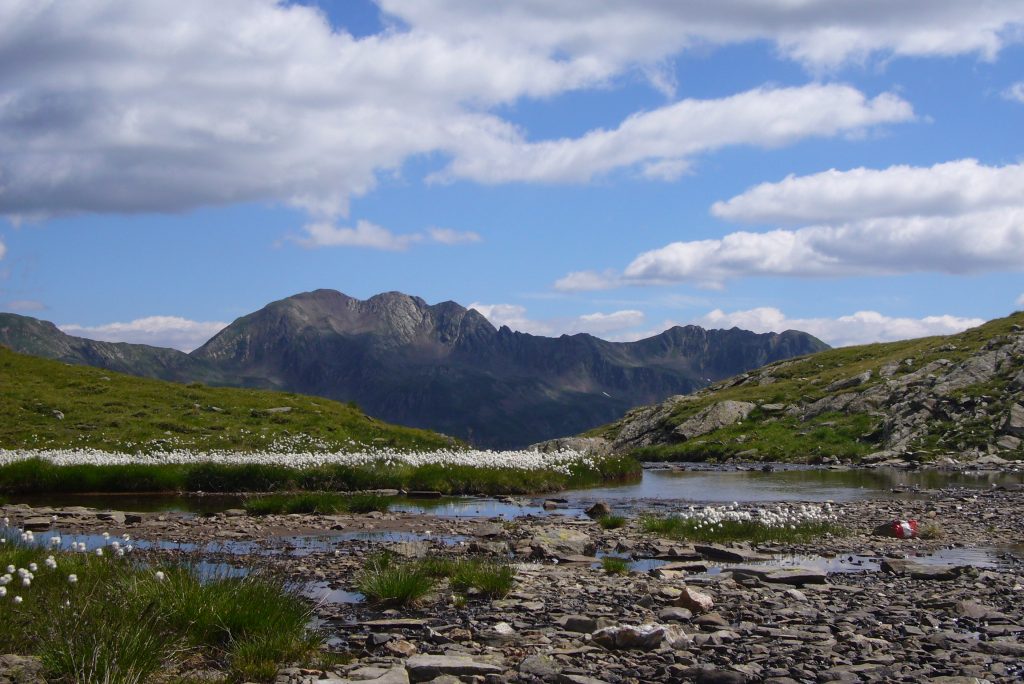 Your first stop on this stage is the legendary Schrentebachboden, an alpine pasture and spring landscape at approx. 2,380m above sea level, where a roaring mountain stream makes its spectacular debut. On the way via the Arntaler Lenke you should take a small detour to the legendary Goldtrögele at 2,630m and to the Degensee (2,720m).

At the Arntaler Lenke, a completely new view opens up, the Dolomites show themselves timidly for the first time and in the north, the Großglockner bids you farewell. 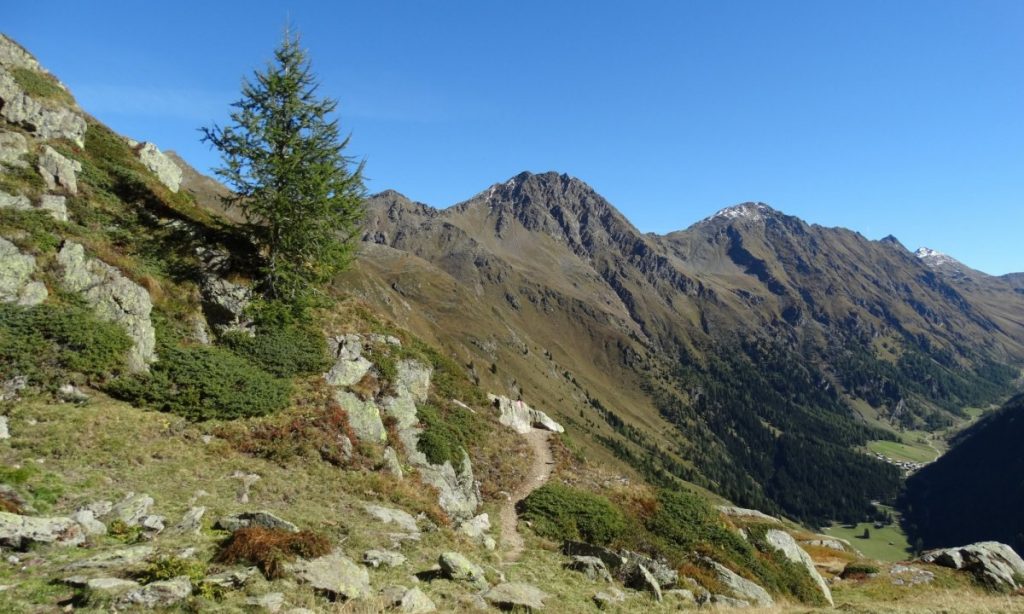 ” Across Smuggler and Shepherd Trails”

Mountain meadows that have been cultivated over centuries, along old shepherd and cattle paths with strange field names, before reaching the first yoke, the hiker reaches a rocky and rugged mountain landscape, in the middle of which, like a dark pearl, the Schwarzsee, a place to stay. Once the Riepenspitze (2,774 m) has been bypassed or climbed, a wide view opens up above the Heimwaldjöchle (2,644 m) to the south, to South Tyrol and its famous Dolomites, which accompany the hike from here and until the end.

Here again we follow ancient shepherd, hiking and smuggler paths, which tell of how people used to travel high up in the mountains rather than down in the valley.

The personal highlight is the 2.774m high Riepenspitze.

A parade of the Sesto Dolomites

After a magnificent ascent through the Alfental valley, past beautiful alpine huts and across flower-covered mowers, you will climb up in all its splendour, the Sesto Dolomites and their famous Three Peaks. They are the undisputed stars of this stage and make you forget that a hotly contested border once ran here, the remains of which are still unmistakably visible in the landscape as a warning reminder. The view from the Toblacher Pfannhorn (2,663 m) represents a highlight of the “Herz Ass” and reveals even much older traces in the landscape, a geological seam zone of continents, the collision of the African and European plates, along which the Pustertal Valley now stretches far down into the Vinschgau Valley.

The highlight of this stage is a detour to the Thurntaler See and the Parggenspitze (2.323m). 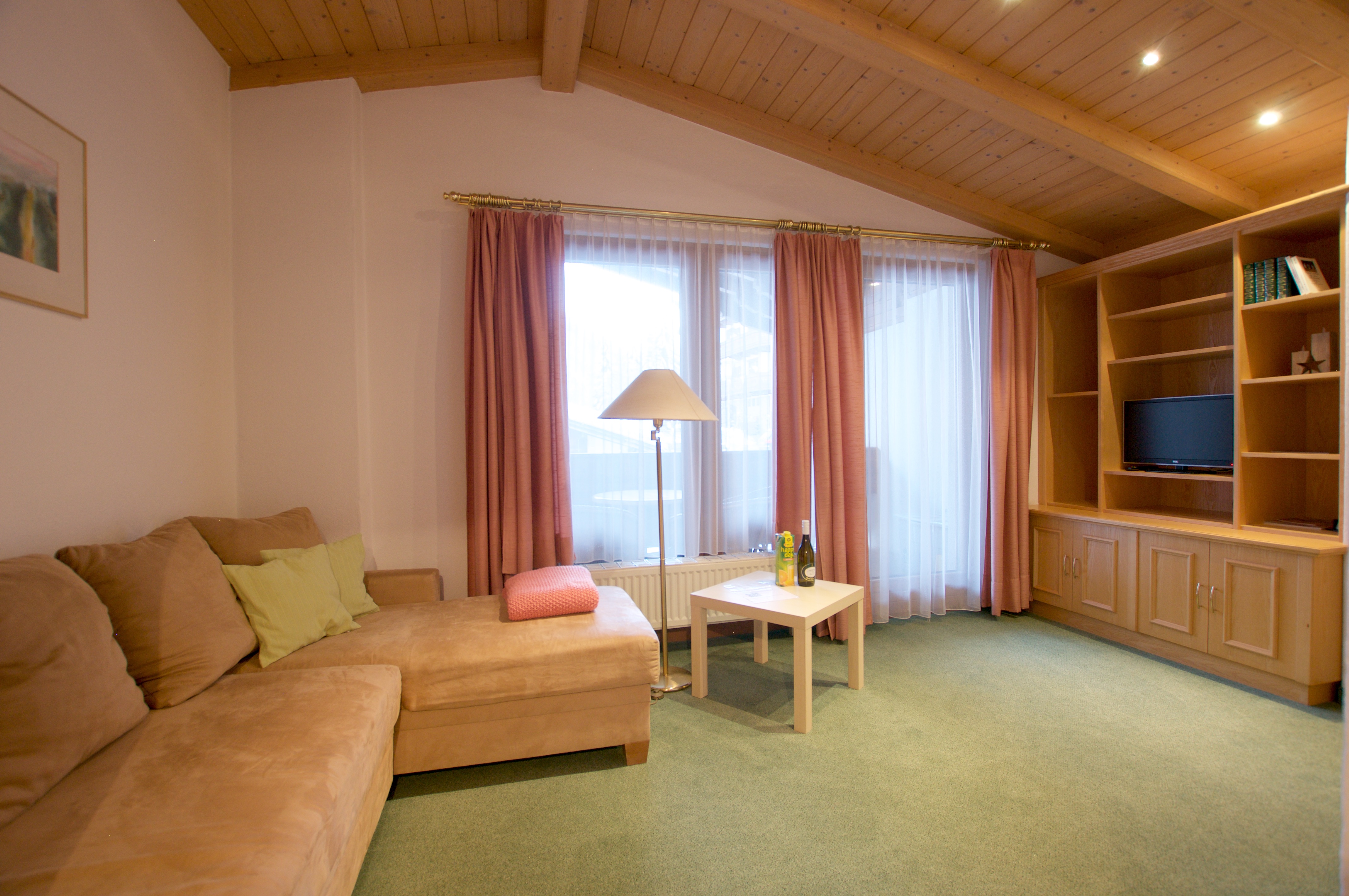 Apartment for 2 PersonsThis apartment is fitted with a fully equipped kitchen, a dining area, a seating area with a sofa and cable TV, a balcony, and a bathroom with bathtub, shower and toilet. 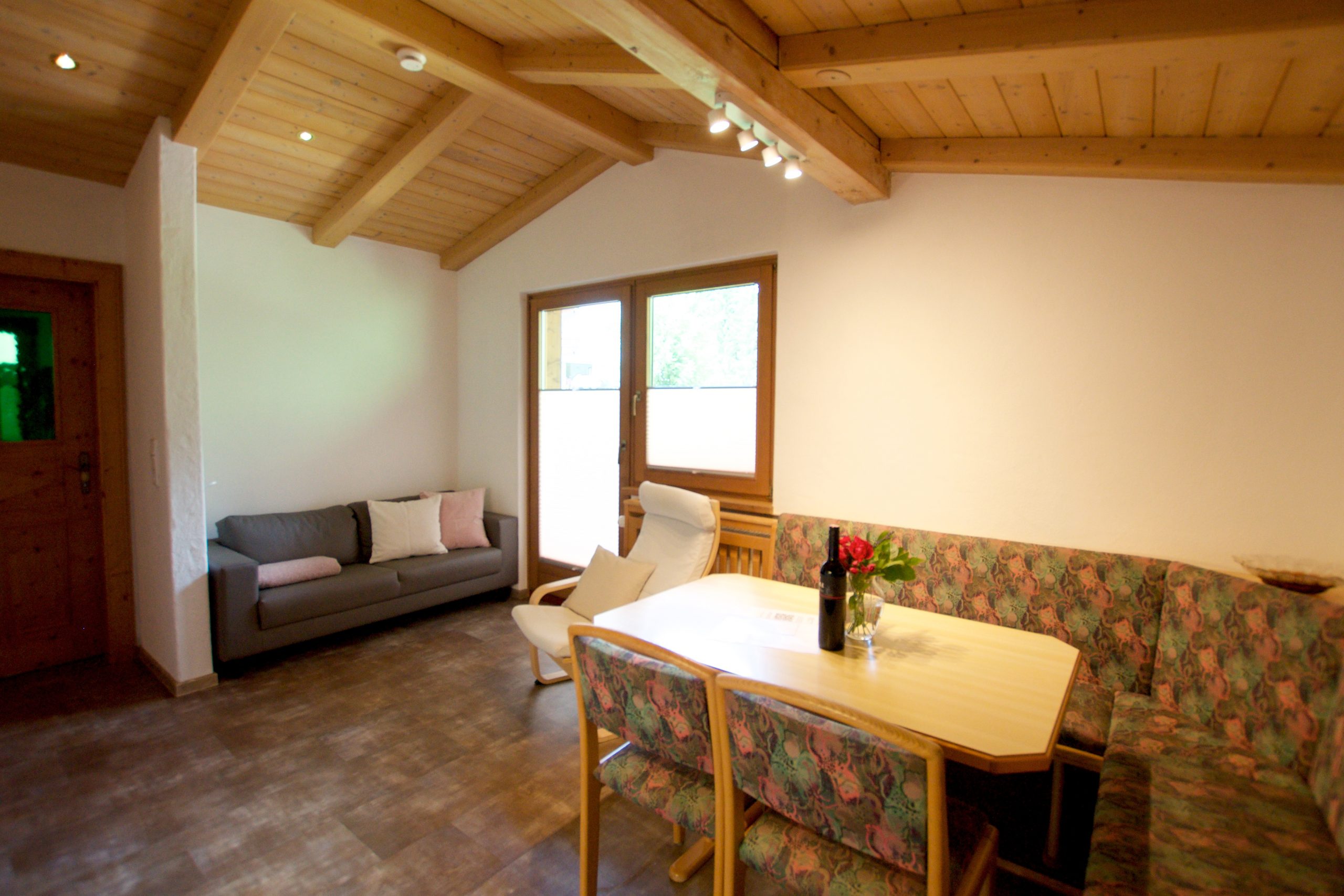 Apartment for 4 personsThe apartment has a modern kitchen with a balcony which offers a glorious view. The two bedrooms provide the ideal environment for relaxation. Especially the double bedroom suite gives guests a romantic atmosphere! 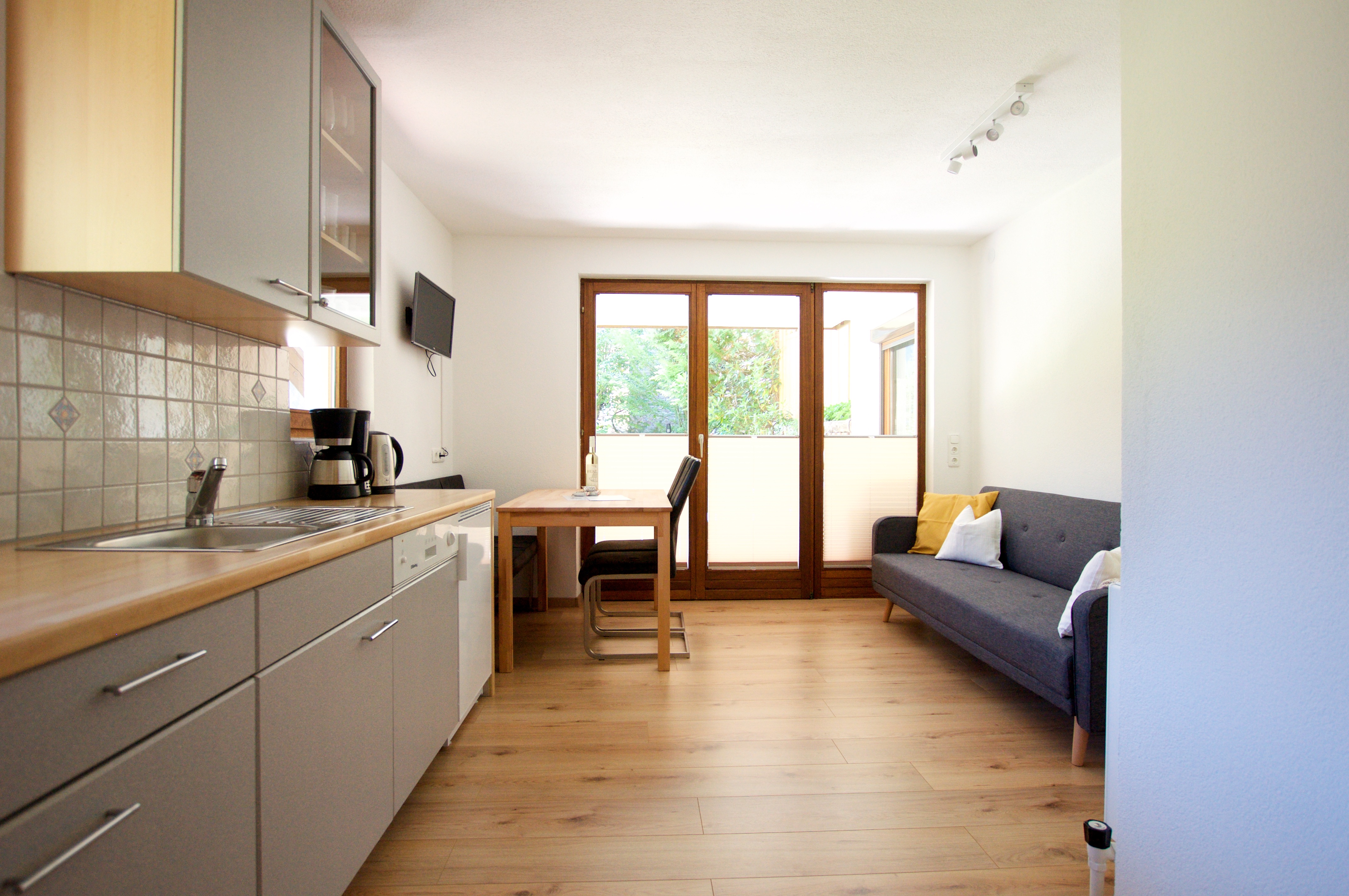 Apartment for 4 personsThe apartment offers a stylish kitchen, two bedrooms and a shower with toilet. A beautiful terrace with an adjacent green space makes this holiday home especially for nature-loving guests and families attractive!